If your experiment or program requires copper thermal straps, we are happy to work with your university (or national laboratory), to get  you the products you need at a price you can afford. TAI understands that university physics, chemistry, and aerospace engineering departments often do not have the same funding that our corporate customers enjoy.  In order to help these programs and our future customers, students and faculty can purchase straps at a fraction of the commercial price.  To learn how your program can qualify, contact TAI today. 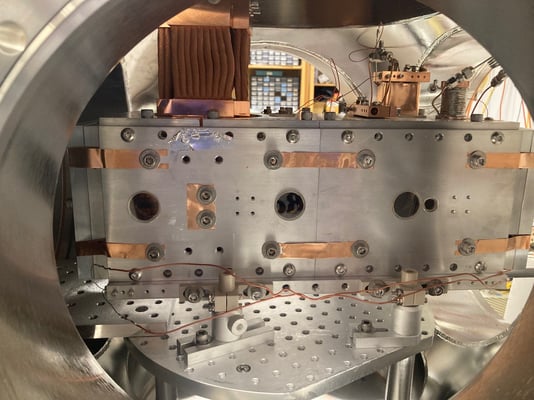 The Standard Model of particle physics is the most accurate mathematical description of reality ever constructed. It is, however, incomplete. Among other shortcomings, it sheds no light on the nature of the ‘dark matter’ that permeates galaxies and intergalactic space, did not predict that a group of fundamental particles known as neutrinos have mass, and cannot explain why the Big Bang so strongly favoured matter over antimatter when creating the contents of our universe. To account for these unexplained phenomena, various standard model ‘extensions’ have been formulated that propose the existence of new forces of nature manifested by as-yet undiscovered particles. Predictions of new particles have historically been tested with multi-billion-dollar particle accelerators like the Large Hadron Collider (or ‘LHC’), currently the largest machine on the face of the Earth. However, the LHC has not yet observed any fundamental particles other than those described by the current form of the SM.

Hope may lie in the prediction that electrons possess an uneven distribution of charge, the degree of unevenness being quantified by a number called the electric dipole moment (or ‘EDM’). Since each standard model extension predicts a different range of possible values for the electron’s EDM, measuring this quantity could verify a standard model extension – the holy grail of modern physics – and transform humanity’s understanding of the universe. Unfortunately, all experiments thus far have failed to detect a nonzero electron EDM.

Our experiment uses the fact that electrons in atoms and molecules will oscillate between different quantum states when put in a magnetic field, analogous to how a gyroscope will ‘precess’ in a circle when torqued by Earth’s gravity. We will use lasers and radio-frequency (or ‘RF) pulses to put a large population of electrons into two different states in which they will precess in opposite directions when an external magnetic field is applied. If electrons have an EDM then they will slowly precess in an applied electric field as well, which will cause a slight asymmetry in the total precession rate between the two states. This asymmetry will be detected using light emitted by the electrons after further laser and RF pulses. Rather than use a lab-generated electric field, we will exploit the enormous naturally-occurring electric field felt by electrons inside polar molecules by conducting our experiments on a population of barium monofluoride (or ‘BaF’) molecules. Due to the extreme reactivity of these molecules, we will trap them in a crystal of solid argon cooled to 4 kelvin (-269 degrees celsius) for the duration of the experiment. If successful, the immense precision promised by this tabletop experimental design would provide a model-independent test of fundamental physics at energy scales thousands of times higher than those reachable by the LHC.

The P50-502 and -505 thermal straps provided by TAI are instrumental in the operation of our apparatus by allowing certain critical components to reach 4 kelvin while also keeping them isolated from vibrations. These components form the source of our molecules, in which a pulsed laser is used to ablate a barium rod in the presence of sulphur hexafluoride gas inside of a cryogenic box filled with helium at 4 kelvin. The helium is used to rapidly thermalize the molecules before they exit the box through a hole into ultra high vacuum as a beam. However, the helium also exits through this hole and must be pumped away. This is achieved by cryosorbing the helium onto panels containing a porous material (coconut charcoal) at 4 kelvin - a process that becomes exponentially less efficient with even a few tenths of a degree increase in temperature.

To learn more about the EDM3 Collaboration, visit our website here: http://www.yorku.ca/edmcubed/ 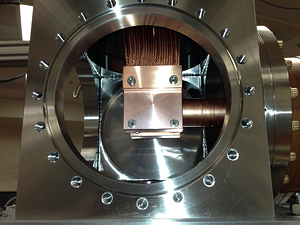 Neutrinos are fundamental particles that play key roles in the early universe, cosmology and astrophysics, and nuclear and particle physics.  Despite their abundant numbers generated by the sun, nuclear reactors, cosmic rays and in the big bang, they remain difficult subjects to study due to the weakness of their interactions.   In particular, the masses of the neutrinos remain unknown, and it is uncertain whether neutrinos are their own anti-particles.
The Majorana Collaboration is an international effort with over 100 participants from 18 institutions in five countries, which is currently constructing the Majorana Demonstrator, an experiment that seeks to observe neutrinoless double-beta decay (0νββ), a decay mode of an atomic nucleus in which two neutrons convert to two protons and two electrons. This process has not been observed, and it is not known whether it exists.  If this decay occurs, a fundamental symmetry of nature, lepton number, must be violated, the neutrino would be its own antiparticle, and the rate at which it occurs will be dependent upon the masses of the neutrinos.  Current experimental lower limits for the half-life of 0νββ are in excess of 1025 years.  This is an exceedingly long time, given that the universe is only 1010 years old! 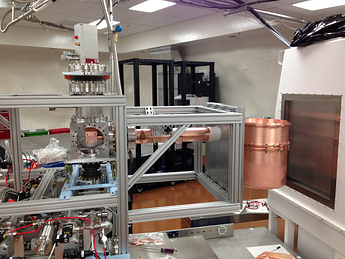 The Majorana Demonstrator will search for neutrinoless double-beta decay using a cryogenic array of germanium crystals enriched in 76Ge, an isotope which has the potential to undergo neutrinoless double beta decay.  Germanium diodes are intrinsically pure detectors of radioactive decay, with excellent energy resolution.  To reach new half-life sensitivities, great measures must be taken to eliminate background events that would mask a potential signal.  Materials used in detector construction must be of the highest possible purity, to limit radiation from impurities.  The experiment will be housed inside of thick layers of copper and lead shielding, to eliminate penetrating radiation from external sources.  To reduce background events generated by cosmic rays, the experiment is located nearly a mile underground, in the Sanford Underground Research Facility (SURF) in Lead, SD.  The Majorana Demonstrator is supported by the United States Department of Energy, Office of Nuclear Physics and the National Science Foundation, Particle Astrophysics program.
In order for the Germanium detectors in the Majorana Demonstrator to operated with optimum performance, they must be operated at near liquid nitrogen temperatures: 80 - 100K, in a vacuum environment.  We are using copper thermal straps, designed and fabricated by Technology Applications Inc., as part of a cooling pathway between our array of Germanium detectors and a Pulse-Tube Cooler, which provides the cooling power. The straps performed perfectly, and there was no detectable degradtion of our vacuum performance using the OFHC Cu Braid under our vaccum conditions. We are very happy with the performance of the straps, the affordable price, and the high level of customer service and attention we received from their Marketing & Sales Department.
- Matt Green
Postdoctoral Research Associate
Majorana Collaboration
University of North Carolina - Chapel Hill

In our department at Yale, we study superconducting circuits; specifically ones that can be used as quantum bits, or qubits. Qubits are the quantum equivalent of computer transistors and are the basic building block of a quantum computer.

While these qubits have many possible physical implementations, we make them out of superconducting circuits consisting for a non-linear inductance made from a Josephson Junction and capacitance. The circuits are fabricated with Aluminium on sapphire and to work, need to be cooled to dilution refridgerator temperatures of about 10mK. This not only makes the devices superconducting but also makes these circuits behave quantum mechanically.
We ordered the P6-501 and P7-501 thermal straps for use at the base stage of a cryogen-free dilution refrigerator. In our fridge, we mounted a second stage, which we call the mezzanine, for mounting samples off the mixing chamber plate. However, we noticed that the mezzanine was many milli-Kelvin warmer than our mixing chamber stage which was at 7mK.
We installed 2 each of the P6-501 and P7-501 Cu thermal straps between the mixing chamber and mezzanine stage for improved thermal contact. The addition of these straps resulted in a noticeable drop in the temperature of the mezzanine plates from around 25mK to about 15mK. This dramatic improvement in the base temperature of our fridge and the excellent build quality of the straps means we will definitely be ordering more.
-Anirudh Narla,
Graduate Student, QuLab
Dept. of Applied Physics, Yale University

The most remarkable aim envisaged at the University of Granada is to build a system to couple two ions stored in different Penning traps. One of the ions is laser-cooled to millikelvin temperatures. The traps have a common electrode in order to make the electric charge induced by the ion flowing through between the traps, and have to run at cryogenic temperature in order to reduce the Johnson noise. A successful completion of this system will allow substituting electronic detection, by the detection of fluorescence photons and this will increase the sensitivity in mass spectrometry, which is important to perform measurements on superheavy elements produced in fusion-evaporation reactions at linear accelerators such at GSI-Darmstadt or to use the mass of specific nuclei for neutrino physics. We are building a shielding structure and we use thermal straps from Technology Applications to reach the temperatures of 4 K and 40 K at different parts of the shielding structure.
-Prof. Daniel Rodriguez
Department of Atomic Molecular and Nuclear Physics
University of Granada 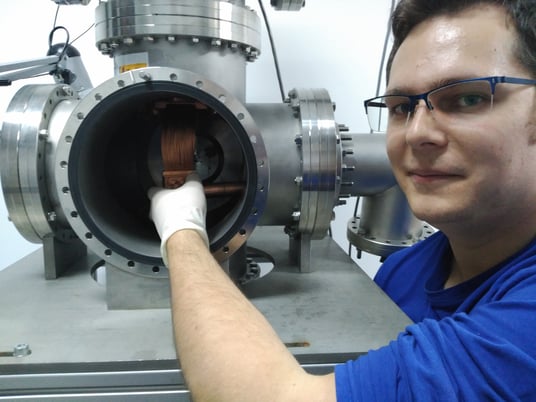 The Atacama Cosmology Telescope (ACT) is a 6 meter telescope located at 17,000 feet in the Andes Mountains of Northern Chile.  Our collaboration consists of over 20 institutions and receives support from the National Science Foundation (NSF) and the National Aeronautics and Space Administration (NASA).  Our primary goal is to study the Cosmic Microwave Background (CMB), millimeter wavelength radiation that was created about 300,000 years after the Big Bang making it the oldest light in the Universe.  We detect this radiation using thousands of highly sensitive detectors that are kept under vacuum inside a large cryostat housed inside the telescope.  We also cryogenically cool the detectors and optical elements to sub-Kelvin temperatures to increase the raw sensitivity.

The elements inside the receiver are cooled using a dilution refrigerator (DR), which has 1 Kelvin and 100 milliKelvin stages.  We need a way to connect these stages of the DR to the elements we wish to cool, which is where the thermal straps manufactured by Technology Applications come into play.  Using high purity, high conductivity copper, we attach the cold plates of the DR to the 1K and 100mK stages inside the cryostat optics tubes via copper to copper bolted mechanical joints.  The thermal straps developed by TA act as an interface between the DR and copper rods that attach to the interior of the optics tubes.  The photographs show the straps connected to the 1K stage and 100mK stage of the DR (right, 1K on top, 100mK on bottom) on one end and the straps connected to the optics tube interfacing rods (middle, 6 rods total with a 1K and 100mK rod for each of the three optics tubes) on the other end.  These connections allow our optics tube elements to be continuously cooled during regular observations of the CMB sky.
The final product looked great, fit the specs, and was delivered on time. We've been cooling and running tests over the last several weeks and so far everything looks great...and (with TAI's straps and other modifications made), our detector arrays are running about 10mK colder than last season.  This is awesome to see and tells us that the straps you produce are very applicable to what we do.
We would definitely recommend your services to others!
-Jonathan Ward
University of Pennsylvania