Thermal straps (commonly referred to as "flexible thermal links," "heat straps," and "thermal braids,"), are a passive heat transfer tools consisting of end fittings ("terminals" or "lugs"), and a flexible conductive material such as copper cable or foil, aluminum foil, and graphite or graphene sheets or fiber bundles. They are a unique thermal management solution, offering a combination of flexibility, vibration attenuation, damping, and isolation. This combination sets thermal straps apart from heat pipes, flexible vapor chambers, and all other passive or active cooling and vibration isolation systems.

A thermal strap transfers heat between two or more locations (a heat source and sink), and protects sensitive and valuable equipment such as cryocoolers, star trackers, and cryostats, when movements from shock, vibration, mechanical function, and thermal expansion or contraction occur. These movements can be related to events like rocket launch, cryostat & cryocooler cool-down, and the day-to-day shock and vibration profiles associated with spaceflight and terrestrial vehicle & equipment operation. While sometimes thought of as simple hardware like nuts or bolts, a thermal strap can be one of the most critical components in any a system or product, as they provide the waste heat removal and vibration attenuation required for proper function.  For additional thermal link information, download our handout: Thermal Straps - Performance, Pricing, and Product Options, and be sure to request copies of our thermal strap catalogs.  TAI offers hundreds of standard model flexible thermal links / straps in addition to custom strap design, manufacturing, and test services, and can provide you with pricing, as well as mass and thermal conductance predictions for any flexible link you may require.

Why do we offer several flexible thermal link / strap options? Because no individual product is ideal under all environmental and operational conditions. Each thermal strap product offers a unique combination of thermal performance, flexibility, durability, vibration attenuation/damping, and mass, which customers must consider. Most importantly: while some materials may be ideal for your application, your budget may dictate which strap you ultimately choose.

To learn more about our product offerings, download our catalogs today, call or email us, or complete a Thermal Strap Questionnaire to get your inquiry started. Remember: all front end (pre-purchase order) design work is always free of charge, and our engineers and strap experts are here to assist you at every step along the way!

Which Thermal Strap is Best for Your Application?

With multiple products to choose from, it is essential to understand which material and configuration may make the most sense for your program, in light of the performance requirements, and the environmental/operational conditions.  The table below outlines some of the most common applications, their operating temperatures, and the commonly used strap types: 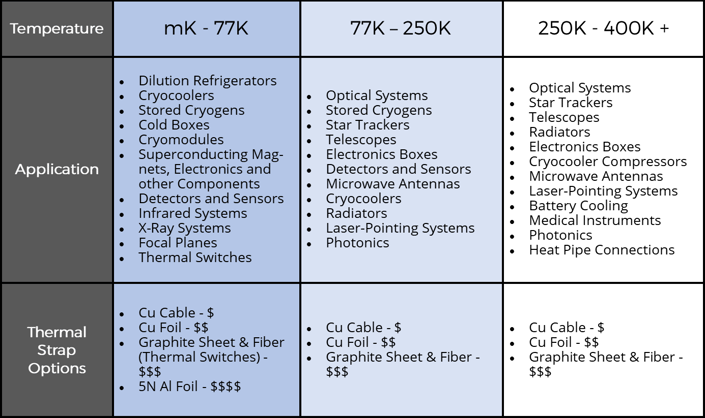 Though the application and operating temperature are important, there are several additional factors to consider when identifying the ideal thermal strap material and configuration.  Your program will likely also need to identify and weigh the following when determining the optimal strap in each situation:

At TAI, our experts are here to help identify, design, and manufacture the ideal thermal solution for your program, based on all of these factors. 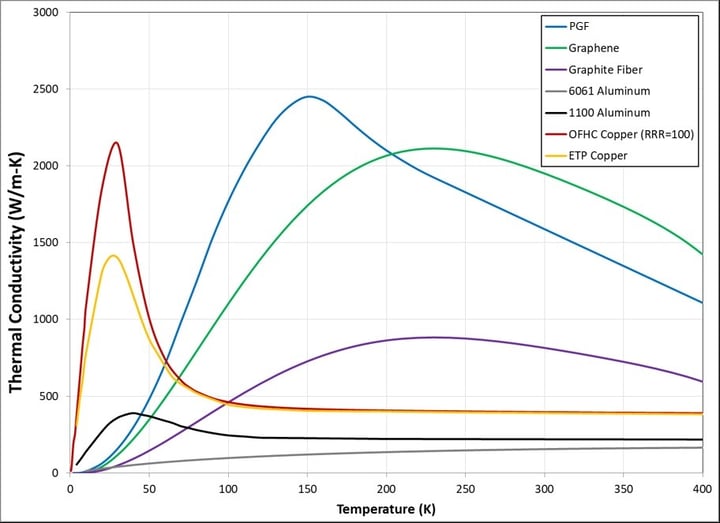 Thermal Straps made from copper braid or rope, and copper or aluminum foil have been used for decades.  They offer durability, and are ideal for use at nearly any operating temperature; from the mK range (when used to cool dilution refrigeration systems), to well over 800K (to cool components near rocket engines).  Durable, effective, and affordable (in most configurations), metallic thermal straps are often the best, and most economical choice for terrestrial applications. 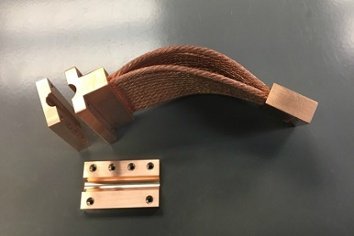 Copper braid or cabling straps are often soldered, brazed, or welded. However, these assembly processes are not ideal for most aerospace, semiconductor, or cryogenic engineering customers, as they can result in exponentially higher thermal resistance losses, and significantly increased stiffness, which can transfer vibrations and damage equipment (as the heat from these processes wick up the cables). To avoid these negative drawbacks, TAI manufactures our straps via a swage ("cold press") process. This is because a cold press, heat-free assembly method is the most efficient method and preserves the flexibility of the conductive materials used in a thermal strap.

When considering flexibility, durability, and performance, a copper cabled thermal strap is the preferred, and most frequently used, in all industries and applications.  Further, TAI's exclusive OFHC UltraFlex™ I and II cabling (used on all standard and custom CuTS®), offers customers the optimal combination of flexibility and thermal performance. They are the most durable of all heat strap products available, and are the ideal choice for cryogenic applications.  CuTS® offer flexibility on all axes, and can handle exponentially greater loads and life cycle flexing than any other strap or material type.

Volume-restricted applications (requiring high thermal performance), may benefit from a stacked metallic foil configuration. However, there are a number of trade offs to consider:

In many cases, foil straps are not the ideal solution. However, there are specific applications and environments in which they may offer benefits over a graphite or copper rope strap.

There are multiple carbon-based thermal strap solutions to consider in the industry.  Though flexible graphite thermal links were initially used only for spaceflight applications operating between 230 - 400K, high conductivity graphite materials (like pyrolytic graphite film, graphene layered foils, and graphite fiber), offer a unique set of benefits over a wide range of operational and environmental conditions, and are now being incorporated into terrestrial and spaceflight cryogenic applications.  Each product offers a combination of mechanical, thermal performance, and financial costs to consider (and graphite fiber, sheet, and graphene foil are not to be confused with rigid Annealed Pyrolytic Graphite material made by Thermacore and other suppliers, which is often used for structural components, and is not flexible nor durable enough to be used as true thermal straps). 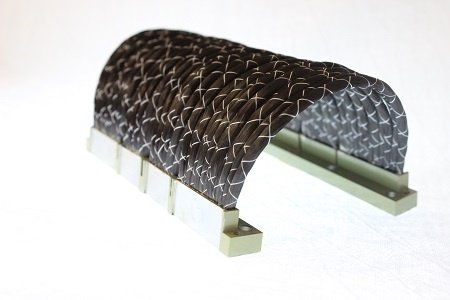 Graphite Fiber Thermal Straps are made with GraFlex™, a bundled "toe" or rope of fibers with a material thermal conductivity of 810 W/(m-K).  Fiber-based straps are more durable and lighter than carbon film/foil straps, and they offer lateral flexibility and deflection without needing to be installed in S or C/U-shaped configurations with a 180+ degree arc. The most notable attributes of graphite fiber straps is their high conductance to low mass ratio, and their unparalleled ability to attenuate and absorb vibration. The average GFTS® assembly is lighter than an equivalent carbon sheet strap, and just 1/5 - 1/10 the mass of a comparable copper rope strap. 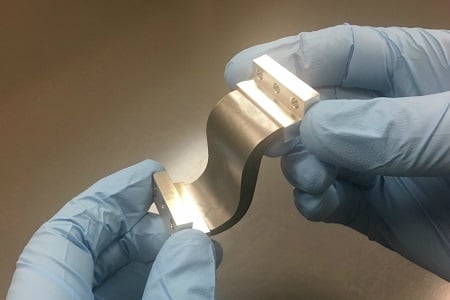 Pyrolytic Graphite Film (PGF) and Graphene Layered Foil/Sheet Flexible Thermal Links offer the highest thermal performance of any of the strap products (above ~80K), ranging from 1,600 W/(m-K) - 1,840 W/(m-K) at a 300K operating temperature, and their compact profiles make them ideal for volume-restricted applications. Though PGF and graphene straps can be more fragile in certain configurations than metallic and fiber-based straps, they offer a unique combination of flexibility, low mass, and thermal performance.

Beyond heritage and qualification history, a critical factor when selecting a thermal strap supplier and product is understanding how the thermal conductivity of a strap is measured, and thus, if the manufacturing process results in consistent quality and performance.  TAI has been at the forefront of thermal strap qualification and thermal conductivity testing for nearly 25 years, and our conductance test and projection processes are highly-accurate. The following excerpt is from our standard work instruction procedures, and provides valuable insight into the test and calculation processes.

The basic premise of measuring the thermal conductance of thermal straps is to apply a measurable amount of heater power (Qhtr) to one end of the thermal strap while securing the other end to a heat sink. The temperatures of the heat source and sink blocks are then measured just under the interfaces of the strap’s end fittings.

Given that external heat leak paths to and from the strap under test are minimized and predictable, the thermal conductance of the strap can be calculated as:

TAI uses a thermal interface material (TIM) (HITHERM™ HT-1205) in order to minimize the thermal resistance at the interface between the strap’s end fittings and the source and sink blocks. This is done because we cannot always control or replicate the exact attachment method and interface used in the specific application and because we are mainly interested in the thermal conductance of the strap itself.

As shown in Figure 1 (top right), and Figure 2 (left), the temperature sensors are embedded in the heat source and heat sink blocks. This puts the temperature measurements directly within the heat flow path. The effects of the blocks, temperature sensor locations, and the bolted interfaces can be determined and removed from the reported strap thermal conductance once the data is reduced.

This measurement technique is important because temperature probes attached to the exterior of the end fittings do not result in accurate measurements. Externally mounted temperature sensors result in measurements that are outside of the heat flow path.

In our standard test configuration, we limit total heat leak to less than 3% of the total heater power for GFTS® and CuTS®. The total heat leak is calculated and taken into account when thermal conductance of the strap is reduced from the test data.

For the strap thermal conductance calculation, the heat leak (Qleak) through the various paths (wires, radiation, and source block support) is determined and subtracted from the measured heater power. The result is the heat flow through the thermal strap from source block to the sink block (Qstrap). The measured temperatures from the temperature sensors embedded in the heat source and sink blocks are used to calculate a raw thermal conductance (Craw). Craw is the value of the direct temperature measurements:

Csc-sk is typically reported as it is directly related to the measurements obtained from the test configuration. Cs is also reported because it is the value of most interest to the end user. 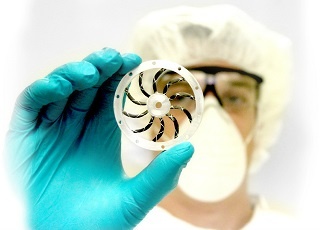 Our thermal strap design, test, and manufacturing heritage spans three decades and began with our very own Scott Willen and Richard Jetley, who developed the first Graphite Fiber Thermal Straps (GFTS®), in SBIR Ph I and II contracts with the USAF in 1996 (this research was later published in Cryocoolers 11).  GFTS® products gained popularity in 2011 - 2013, when several dozen assemblies, co-designed and manufactured by TAI Quality Manager, Trevor Sperry, were used to cool the phased antenna arrays and data acquisition systems on the ORION spacecraft, and compressors on JAXA's Astro-H satellite.  Since 2015, GFTS® have played vital roles in notable programs such as Boeing's CST-100 Starliner, NASA's IXPE and GRACE-FO satellites, ESA's Solar Orbiter, DLR’s EnMAP, and several other spaceflight missions (in addition to ground-based applications in the medical and cryogenic engineering industries).

Our Copper Thermal Strap (CuTS®) heritage began in 2004, with our first-generation solderless copper braided straps (offered until 2014).  TAI was the first and only supplier to offer a fully customizable standard product line and catalogs, both created by our Director of Business Development, Tyler Link, in 2013.  Two years later, TAI developed OFHC UltraFlex cabling, optimized end fitting design, and improved swage & final machining methods.  In 2017, this new generation of straps was studied extensively by Fermi National Lab and other universities and laboratories (research was later published in volume 86 of the Journal Cryogenics, and co-authored by TAI's Tyler Link and Jamie Deal).

Work with Pyrolytic Graphite Film-based straps began in 2013, culminating in the X-Series® Strap; the world's first and only graphite and graphene sheet thermal strap standard product line.  X-Series® PGF-based thermal links (PGL™) were then space-qualified by NASA JPL in 2018 and advanced to TRL 8 with spaceflight qualification testing performed by Airbus and the DLR, on the Merlin program. PGL™ now plays vital roles in spaceflight programs with Lockheed Martin, Airbus, the DLR, and CNES (and like GFTS®, are also being used for ground-based applications in the medical and cryogenic engineering industries).

TAI provides on-site testing and analysis services here at our Boulder, CO facility (though we partner with an internationally renowned test facility for shock and vibe testing). From stiffness to thermal conductance, thermal cycling, shock & vibe, tensile strength measurements, and more, we have you covered!